Home » Blog » An Introduction of VANET

An Introduction of VANET

VANET is a type of MANET, which is a group of mobile, wireless nodes which cooperatively and spontaneously form an IP-based network. This network is independent of any ﬁxedinfrastructure or centralized administration. A node communicates directly with nodes within its wireless communication range. Nodes that are part of the MANET, but beyond each other’s wireless range communicate using a multi-hop route through other nodes in the network. These multi-hop routes change with the network topology and are determined using a routing protocol such as DSDV, DSR, AODV, TORA, ZRP, etc.

Vehicular Ad Hoc Networks (VANETs) have been proposed as a technology that will enable connectivity of users on-the-move and also implement Intelligent Transportation Systems(ITS). In VANETs, nodes can not freely move around an area or surface; their movements are restricted within the roads formed around obstacles such as buildings.

VANET is used to provide communication among nearby vehicles and between vehicles and nearby fixed equipment, usually described as roadside equipment, usually described as roadside equipment. VANET technologies aim at enhancing traffic safety for drivers, providing comfort for passengers, or reducing transportation time and fuel consumption with many potential applications. VANET is a technology that uses moving cars as nodes in a network to create a mobile network. VANET turns every participating car into a wireless router or node, allowing cars approximately 100 to 300 meters of each other to connect and, in turn, create a network with a wide range. One of the greatest challenges of VANETs is to establish cost-effective connections between vehicles and vehicles or between vehicles and roadside units (RSUs).

Broadcasting in vehicular ad hoc networks (VANET) is emerging as a critical area of research. One of the challenges posed by this problem is the conﬁnement of the routing problem to vehicle-to-vehicle (V2V) scenarios as opposed to also utilizing the wireless infrastructure (such as cellular networks). At a fundamental level, safety and transport efﬁciency is a mandate for current car manufacturers and this has to be provided by the cars on the road as opposed to also using the existing wireless communications infrastructure.

VANET suggests unlimited advantage to companies of any size. Vehicles access to fast speed internet which will change the automobiles’ onboard system from an effective widget to necessary productivity equipment, making nearly any internet technology accessible in the car. Thus this network does pretend specific security concerns as one problem is no one can type an email during driving safely. This is not a potential limit of VANET as productivity equipment. It permits the time which has wasted for something in waiting called “dead time”, has turned into the time which is used to achieve tasks called “live time”.

If a traveler downloads his email, he can transform jam traffic into a productive task and read the on-board system and read it himself if traffic stuck. One can browse the internet when someone is waiting in the car for a relative or friend. If GPS system is integrated it can give us a benefit about traffic related to reports to support the fastest way to work. Finally, it would permit for free, like Skype or Google Talk services within workers, reducing telecommunications charges.

The main goal of VANET is to provide safety and comfort for passengers. To this end, special electronic devices will be placed inside each vehicle which will provide an Ad-hoc network and server communication. Each vehicle equipped with a VANET device will be a node in the ad-hoc network and can receive and relay others messages through the wireless network. There are also multimedia and internet connectivity facilities for passengers, all provided within the wireless coverage for each car. 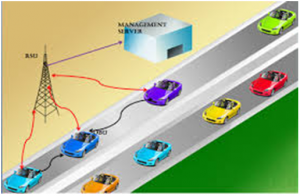 High Dynamic topology: The speed and choice of path define the dynamic topology of VANET. If we assume two vehicles moving away from each other with a speed of 60 mph ( 25m/sec) and if the transmission range is about 250m, then the link between these two vehicles will last for only 5 seconds ( 250m/ 50ms-1). This defines its highly dynamic topology.

Frequent disconnected Network: The above feature necessitates that in about every 5 seconds or so, the nodes needed another link with a nearby vehicle to maintain seamless connectivity. But in case of such failure, particularly in the case of low vehicle density zone, frequent disruption of network connectivity will occur. Such problems are at times addressed by road-side deployment of relay nodes.

Mobility Modeling and Prediction: The above features for connectivity, therefore, needed the knowledge of node positions and their movements which as such is very difficult to predict keeping in view the nature and pattern of movement of each vehicle. Nonetheless, a mobility model and node prediction based on a study of predefined roadways model and vehicle speed are of paramount importance for effective network design.

Communication Environment: The mobility model highly varies from highways to that of the city environment. The node prediction design and routing algorithm also, therefore, need to adapt to these changes. The highway mobility model, which is essentially a one-dimensional model, is rather simple and easy to predict. But for the city mobility model, street structure, variable node density, presence of buildings and trees that behave as obstacles to even small distance communication make the model application very complex and difficult. 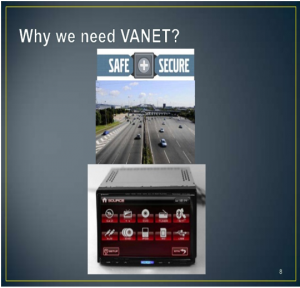 Three major classes of applications possible in VANET are

Ad-hoc routing: AODV (Ad Hoc on-demand distance vector) and DSR (Dynamic source routing) are therefore can be applied to VANET. However, the simulation of these algorithms in VANET brought out frequent communication breaks which is mainly attributed to the high dynamic nature of its nodes. To meet the VANET challenges, these existing algorithms are suitably modified.

The following application in their model:

In another model, AODV is modified to forward the route request within a zone (rectangular or circular) of relevance (ZOR) from the point of event occurrence to make the algorithm more effective.

Position-based Routing: The technique employs the awareness of vehicles about the position of another vehicle to develop the routing strategy. One among the best-known position-based routing is GPSR (Greedy Perimeter Stateless Routing) which works in the principle of combining greed forwarding and face routing. This algorithm has the following advantages and constraints.

Cluster-based routing: In cluster-based routing, several clusters of nodes are formed. Each cluster is represented by a cluster head. Inter-communication among different clusters is carried through cluster heads whereas intra-communication within each cluster is made through the direct link. This cluster algorithm, in general, is more appropriate for MANET. But for VANET, owing to its high speed, and unpredictable variation of mobility, the continuity of link in the cluster often breaks. Certain modification in the algorithm (COIN – Clustering for Open IVC Network put forth by Blum et al.LORA-CBF – Location-based Routing Algorithm using Cluster-based Flooding suggested by Santos et al.) such as the incorporation of a dynamic movement scheme, expected decisions of a driver under a certain scenario, enhancing the tolerance limit of inter-vehicle distances are included that on are observed to provide more stable structure at the cost of little additional overhead.

Broadcast-based Routing: This is the most frequently used routing protocol in VANET especially to communicate safety-related messages. The simplest broadcast method is carried by flooding in which each node rebroadcasts the message to other nodes. This ascertains the arrival of messages to all targeted destinations but has a higher overhead cost. Moreover, it works well with a lesser number of nodes in the network. A larger density of nodes causes an exponential increase in message transmission leading to collisions, higher bandwidth consumption, and a drop in overall performance. Several selective forwarding schemes such as BROADCOMM (by Durresi et al.), UMB (Urban Multihop Broadcast Protocol), Vector-based Tracking Detection (V-TRADE), History Enhanced V-TRADE (HV-TRADE), etc are proposed to counter this network congestion.

Key management mechanisms for secure VANEToperation turn out to be a surprisingly intricate and challenging endeavor, because of multiple seemingly conflicting requirements. On one hand, vehicles need to authenticate vehicles that they communicate with; and road authorities would like to trace drivers that abuse the system. On the other hand, VANETs need to protect a driver’s privacy. In particular, drivers may not wish to be tracked down wherever they travel.

Privacy: RSUs and casual observers should not be able to track down a driver’s trajectory in the long term.  Authorities can already trace vehicles through cameras and automatic license-plate readers, however, VANETs should not make such tracing any simpler. The privacy requirements seemingly contradictory to the authenticity requirement: suppose each vehicle presents a certificate to vouch for its validity, then different uses of the same certificate can be linked to each other. In particular, suppose a vehicle presents the certificate to an RSU in one location; and later presents the same certificate to another RSU in a different location. Then if these two RSUs compare the information that they have collected, they can easily learn that the owner of the certificate has traveled from one location to another.