An Artificial Neural Network (ANN) is an information processing model. That is inspired by the biological nervous systems like a human brain which process information. It is composed of a number of interconnected processing elements. These processing elements are known as neurons. In order to solve specific problems, for an application. Different ANN structures are need to be configured. Using a learning process. In biological systems adjustments in synaptic connections are happened, in the same way the connected edges update their weights. That exist between the neurons.

Artificial neural networks, commonly referred to as “neural networks”. It is a highly complex, nonlinear, and parallel information-processing system. It has the capability to organize its structure (neurons) to perform computations. That can be used for (e.g., pattern recognition, perception, and motor control). For example, human vision, which is an information-processing task. It is the function to provide a representation of the environment around us, to input the data we need to interact with the environment. The Neural Network accomplishes perceptual tasks.

More specifically, “A neural network is an interconnected assembly of simple processing elements, units or nodes, whose functionality is loosely based on the animal neuron. The processing ability of the network is stored in the inter-unit connection strengths, or weights, obtained by a process of adaptation to, or learning from, a set of training patterns”.

Artificial neural networks are an attempt at modeling the information processing capabilities of nervous systems. Thus, first of all, we need to consider the essential properties of biological neural networks from the viewpoint of information processing. This will allow us to design abstract models of artificial neural networks, which can then be simulated and analyzed. The human brain has capabilities in processing information and marking instantaneous decisions. Many researchers have shown that the human brain makes computations in a radically different manner to that done by binary computers. The neuron is a massive network of parallel and distributed computing elements, many scientists are working for the last few decades to build a computational system called a neural network, which is also called a connectioned model. A neural network is composed of a set of parallel and distributed processing units called nodes or neurons, these neurons are interconnected by means of unidirectional or bidirectional links by ordering them in layers. 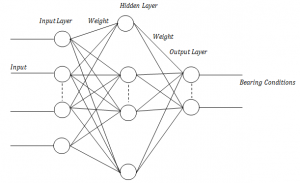 The basic unit of the neural network is the neuron, it consists of N no of inputs to the network are represented by and each input is multiplied by a connection weight these weights are represented by. The product of input and weight are simply summed and feed through a transfer function (activation function) to generate the result (output).

It is apparent that a neural network derives its computing power through, first, its massively parallel distributed structure and, second, its ability to learn and therefore generalize. Generalization refers to the neural network’s production of reasonable outputs for inputs not encountered during training (learning). These two information processing capabilities make it possible for neural networks to find good approximate solutions to complex (large-scale) problems that are intractable.

Non-linearity: An artificial neuron can be linear or nonlinear. A neural network, made up of an interconnection of nonlinear neurons, is itself nonlinear. Moreover, the non-linearity is of a special kind in the sense that it is distributed throughout the network. Non-linearity is a highly important property, particularly if the underlying physical mechanism responsible for the generation of the input signal (e.g., speech signal) is inherently nonlinear.

Input-Output Mapping: A popular paradigm of learning, called learning with a teacher or supervised learning, involves modification of the synaptic weights of a neural network by applying a set of labeled training examples, or task examples. Each example consists of a unique input signal and a corresponding desired (target) response. The network is presented with an example picked at random from the set, and the synaptic weights (free parameters) of the network are modified to minimize the difference between the desired response and the actual response of the network produced by the input signal in accordance with an appropriate statistical criterion. The training of the network is repeated for many examples in the set until the network reaches a steady state where there are no further significant changes in the synaptic weights. The previously applied training examples may be reapplied during the training session but in a different order. Thus the network learns from the examples by constructing an input-output mapping for the problem at hand.

Evidential Response: In the context of pattern classification, a neural network can be designed to provide information not only about which particular pattern to select but also about the confidence in the decision made. This latter information may be used to reject ambiguous patterns, should they arise, and thereby improve the classification performance of the network.

VLSI Implementability: The massively parallel nature of a neural network makes it potentially fast for the computation of certain tasks. This same feature makes a neural network well suited for implementation using very-large-scale-integrated (VLSI) technology. One particular beneficial virtue of VLSI is that it provides a means of capturing truly complex behavior in a highly hierarchical fashion.

Uniformity of Analysis and Design: Basically, neural networks enjoy universality as information processors. We say this in the sense that the same notation is used in all domains involving the application of neural networks. This feature manifests itself in different ways: