Various network applications are requiring increasingly higher bandwidth and generating a heterogeneous mix of network traffic. Existing networks cannot provide the transport facilities to efficiently support a diversity of traffic with various service requirements. ATM was designed to be potentially capable of supporting heterogeneous traffic (e.g., voice, video, data) in one transmission and switching fabric technology. It promised to provide greater integration of capabilities and services, more flexible access to the network, and more efficient and economical service.

Internet applications have been written in the context of an IP-based network, and do not take advantage at all of the ATM network capabilities since they are hidden by this connectionless IP layer. The provision of Internet applications directly on top of ATM, described here, removes the overhead and the functional redundancies of a protocol layer, and makes it possible to take advantage of the various service categories offered by ATM networks, while maintaining the interworking with the IP-based network.

Asynchronous Transfer Mode (ATM) has emerged as the most promising technology in supporting future broadband multimedia communication services. To accelerate the deployment of ATM technology, the ATM Forum, which is a consortium of service providers and equipment vendors in the communication industries, has been created to develop implementation and specification agreements.ATM was intended to provide a single unified networking standard that could support both synchronous and asynchronous technologies and services while offering multiple levels of quality of service for packet traffic.

ATM allows the user to select the required level of service, provides guaranteed service quality, and makes reservations and preplans routes so those transmissions needing the most attention are given the best service.

Asynchronous Transfer Mode (ATM), sometimes called cell relay, is a widely deployed, high-speed, connection-oriented backbone technology that is easily integrated with technologies such as SDH, Frame Relay, and DSL. ATM uses short, fixed-length packets called cells to carry data, and combines the benefits of circuit switching (guaranteed capacity and constant transmission delay) with those of packet switching (flexibility and efficiency for intermittent traffic). ATM is more efficient than synchronous technologies such as time-division multiplexing (TDM), in which each user is assigned a specific time slot that no other station can use. Because ATM is asynchronous, time slots are available on demand. An ATM network is made up of ATM switches and ATM end systems (e.g. workstations, switches, and routers). An ATM switch is responsible for cell transit through an ATM network. It accepts an incoming call from an ATM end system (or another ATM switch), reads and updates the cell header information, and switches the cell to the appropriate output interface. 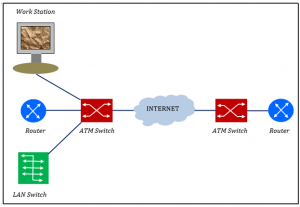 Asynchronous transfer mode (ATM) is a cell-oriented switching and multiplexing technology that uses fixed-length. ATM is a connection-oriented technology, in which a connection is established between the two endpoints before the actual data exchange begins. Asynchronous Transfer Mode (ATM) is a transfer protocol with the following characteristics:

The high-level benefits delivered through ATM services deployed on ATM technology using international ATM standards can be summarized as follows:

munish
March 30, 2021
No Comments
Posted in:
Computing Technology, Networking
Comments
There are no comments yet.
Write a comment
Cancel reply